The Fire That Changed My Life

A couple of weeks ago while I was photographing Kathryn and Neill’s wedding in Holland, my life at home changed forever.

Growing up on a ranch in rural BC, was the best life I could have ever hoped for, and I wouldn’t trade that for anything.

On the evening of July 28th, my brother posted on his Facebook status that there were forest fires 3km to the north, and 3km to the south.  The next day I phoned my parents but they told me they weren’t concerned at all, as one fire was way up across the highway and over the rimrock and the other fire was across the river.  And I was across the world in Amsterdam.

As the pictures show below, it didn’t take long for fire above the rimrock to burn down the hill, jump the highway and burn up over half of my parents property.  Meanwhile, the fire across the river grew to over 14,000 hectares in size in just a few short days, and a couple of other fires started within a few kilometers of my parents.

In the end, the only thing that saved the house was the airtankers under the quick action of the birddog pilot, Jeff.  The fire burned to within 200m of the house, destroyed, hundreds of acres of grazing and timber, and burnt up 9km of fencing.

Once I was back home, all we did was watch the countryside burn up for the entire month of August, as the helicopters flew over the house hundreds of times a day, doing their best to fight the fires.

My Dad’s 1500 acre woodlot, burnt up in the fire across the river.

But, the people, animals, and buildings all survived.  Thank God for that.

My mom took most of the early pictures, and then I continued to document this fire with follow up pictures. 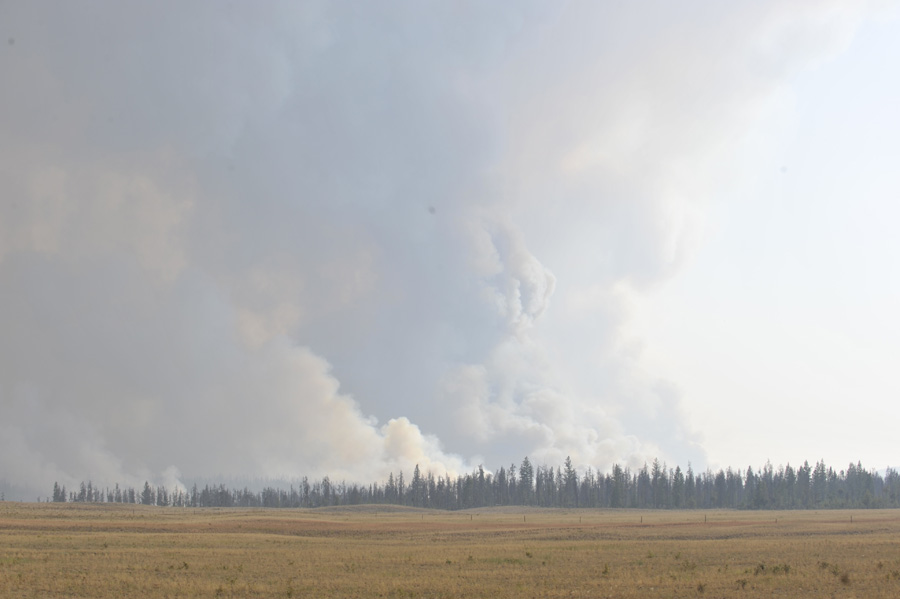